A very good story about trees and the forest of our world. It sets you thinking what wrong have we done.

“It’s so simple,” she says. “So obvious. Exponential growth inside a finite system leads to collapse. But people don’t see it.”

The use of a good story

The best arguments in the world won’t change a person’s mind. The only thing that can do that is a good story.

Trees speak, sing, experience pain, dream, remember the past, and predict the future.

This novel is probably inspired by a 2015 book The Hidden Life of Trees. Trees have “brain” too. Just that we don’t see it, because it is largely underground.

She could tell them about a simple machine needing no fuel and little maintenance, one that steadily sequesters carbon, enriches the soil, cools the ground, scrubs the air, and scales easily to any size. A tech that copies itself and even drops food for free. A device so beautiful it’s the stuff of poems. If forests were patentable, she’d get an ovation.

Life is speculation, and speculation is life. What a marvelous word! It means to guess.

What you make from a tree should be at least as miraculous as what you cut down.

“I once let my professor die because no one else in the lecture hall stood up. The larger the group … the harder it is to cry, Fire?”

The greatest flaw of the (human) species is its overwhelming tendency to mistake agreement for truth.

Trees have much longer lifespan than human

The first chapter on the Hoels family spans across 5 generations! A point to drive across – human lifespan is short compared to trees!

A short-term species cannot adequately prepare for the long term – and won’t, if doing so means sacrificing present convenience.

Eventually, humankind will perish, because of our own wrongdoing.

The past and the future, it turns out, are mirror images of each other. Neither contains people.

You can watch the hour hand, Mimi finds, hold your eyes on it all around the circle of the clock, and never once see it move.

But, of course, it’s not the world that needs saving. Only the thing that people call by the same name.

What we need to save is not the forest, but humankind.

There are 9 characters in the novel. One of them is puzzling and doesn’t connect completely with the rest. Neelay developed a Minecraft-like game.

The author seems to suggest AI has a role when human eventually commit eco-suicide.

The next new species will learn to translate between any human language and the language of green things. 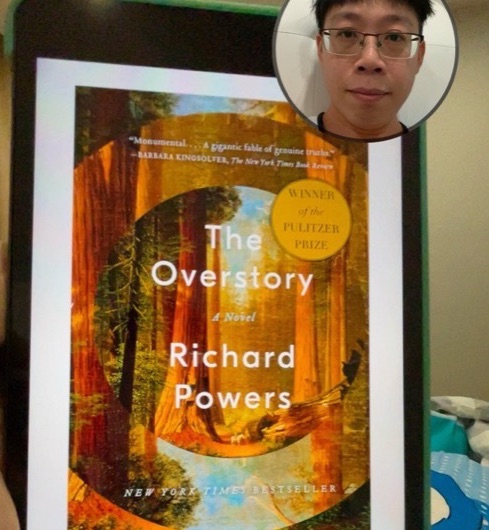