UPDATE on 13 Mar 2019: News of Mobike shutting down operations in Singapore

I love the concept of bike sharing. It has been useful for my daily commute within Yishun, and therefore I have tried and paid for the services in different periods.

Let’s start with Mobike, because I am writing largely because I am deeply disappointed with them, after paying $19.99 for 3 months.

Within 10 days of using in Yishun, I have encountered very bad bikes and availability.

You might see lots of mobike around, but the fact is that many are not working.

This is a fact, and I knew it too late.

When I find one that I can unlock, it is usually very poorly maintained – torn seats, hard to pedal, dusty, rusty chain.

In 2 separate occasions, the chain fell out while I am cycling! With that kind of “quality”, I know why most bikes are broken.

I can’t blame Mobike for such selfish acts, but it says a lot about their service.

They are not maintaining a service. They are leaving their bikes to die.

They are quite the last to arrive in Singapore, and will probably be the last standing.

Their bikes are decent and abundant.

Fairly easy to find one in Yishun. I have never encountered chain falling out or any of the crap like Mobike.

The biggest con is that the app takes way too long to unlock. It is often that I stand beside a bike, phone near to it’s lock, wasting a minute or more waiting as I wait for the progress bar to “unlock”. Some times it will throw some errors, and you have to try again.

Their app development probably is less mature. When parking QR code was introduced, the app always fail to scan and park, therefore every time I have to manually appeal. But that was fixed in subsequent app update.

Once Mobike is gone, SG Bike will have a monopoly, and we know what happens when Uber is gone.

Even during this duopoly, SG Bike have already raise their price.

Shortly after posting this, there are rumours that Mobike is shutting down operations in Asia Pacific markets.

So I emailed asking if I could get refund of my $19.99 subscription :) Here’s their reply: 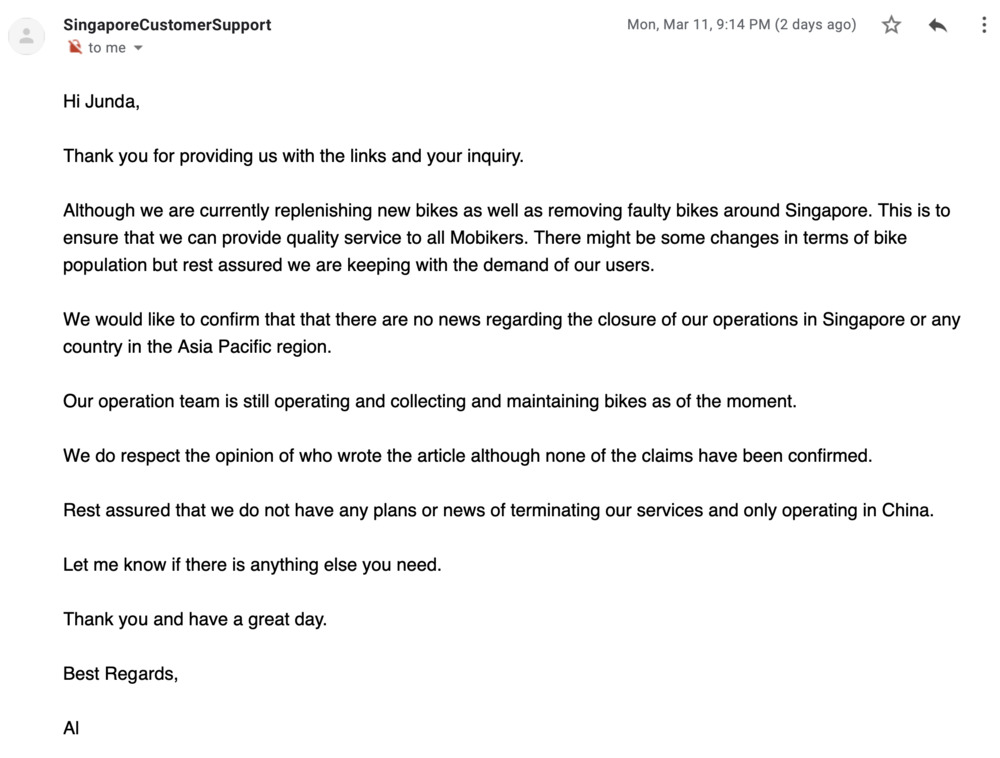 Rest assured that we do not have any plans or news of terminating our services and only operating in China.

Wow. I believe in the rumours.

But let’s see if rumours or the customer service officer is right.