iTunes Connect provide sales reports for to developers on their released iphone applications, but there are merely text files which are hard to digest. Further more, the reports are purged on a regular basis which you could at most trace for the last 7 daily reports and last 13 weekly reports.

To make life simpler and make the mere text files more useful, some tools are made available by fellow developers. Below are 3 tools I found.

AppSales is a Mac application that tabulates your total downloads and sales, by importing the mere text files. As all my apps are currently free apps, I could not see any sales figure. But AppSales provide the grand total downloads that I was looking for.

Anyway, in 7 weeks, my numbers are: 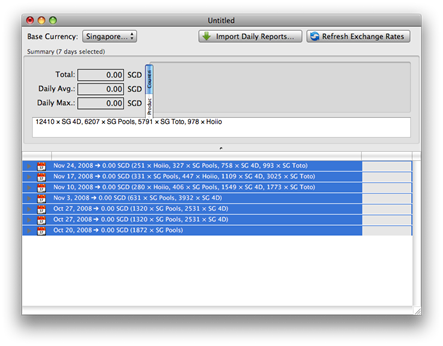 The original Python script can be downloaded from Google code.

If you were to use the auto download reports scripts in (3) below, then you may want to download my modified AppStoreStat script that accepts the filenames from (3).

MaddyHome has a bash script that does some automation and web scraping to download the mere texts from iTunes Connect.

Remember to edit the scripts with your iTunes Connect account. You may also want to run a cron job for the scripts (: